Six Flags Theme Park we all know about this theme park originally named Six Flags Entertainment Corporation or in short Six Flags. It’s an American amusement park corporation. The head office of this theme park is in Arlington, Texas. It is also in Canada, Mexico, and the United States. Six Flags is words biggest theme park in the world which owns more theme parks and waterparks combined than any other amusement park all over the world. Also, it has the seventh-highest attendance all over the world. The Six Flags company manages 27 other properties in North America, like Theme parks, amusement parks, water parks, and also a family entertainment center.

In the year 2019, Six Flag Theme Park and all of the other properties hosted 32.8 million guests. This theme park was founded in the year 1960 and started with the name Six Flags in Texas. It has a corporate office in Midtown Manhattan, While the headquarters is in Arlington, Texas. The name of “Six Flags” is referred to the 6 nations governed by Texas and are Spain, France, Mexico, The Republic of Texas, The United States, and The Confederate States of America. Six Flags is Invented by Angus G. Wynne and some other inventors. The construction of Six Flags started in 1960 in Texas and the next year it was opened for a short season of 45 days. 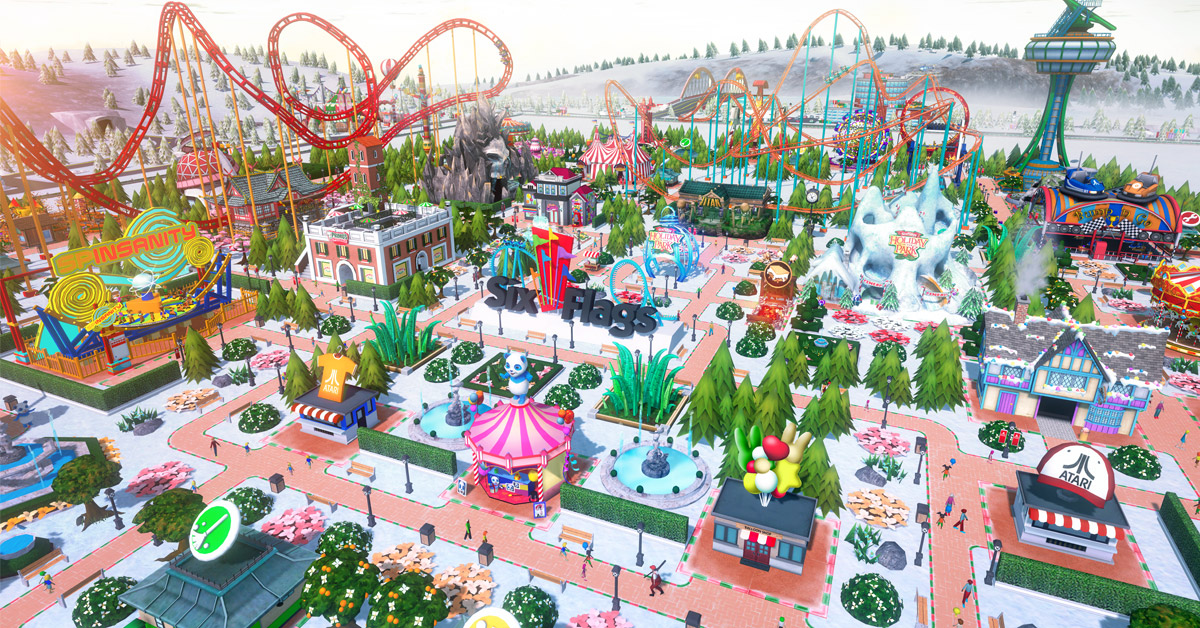 Six Flags Theme Park is one of the best tourist attractions in the state, it’s an Over 212-acre theme park located in Arlington, Texas. The exact location is east of Fort Worth and about 15 miles west of Dallas.

Six Flags in Texas hosts some seasonal events organize in the year including:

Frontier City-based in Oklahoma City was actually owned by Sox Flags until the year 2006. Then Six Flags dropped the [ark and get back it last year. The rides of the small park are home to an old Arrow Lightning room named “Diamondback”, Wildcat named classic wooden roller coaster, Silver bullet Schwarkzkopf coster, and some other supporting roller coasters. Overall the park is pretty good but we can’t say this best in comparison to other theme parks of Six Flags.

This Theme Park is a small theme park and water park outside of Glens Falls, New York in Lake George. In this park, The Comet named coaster is one of the best wooden coasters out there. It also has one of the best roller coasters named Alpine Bobsled in the US. Constantly people lable this park as the runt of Six Flags. If we talk about the overall look it really doesn’t have anything outstanding to offer.

La Ronde doesn’t get good reviews as its name, but we will tell you some of the good things about it. This city is on an island and it’s pretty good with poutine so it’s okay. It needs some more setup to manage this park by Six Flags. It has a “Goliath” Home which is a B&M Hyper, and also has a big wooden roller coaster named “Le Monster”. La Ronde also has a Star Flyer “Vol Ultimate”. This ride is a good option for you if you visit La Ronde. The reviews are not soo good about this park and it’s also at the bottom of the Six Flags Theme Park List.

This beautiful and charming theme park is located between Rochester and Buffalo, NY. It has an intense hyper roller coaster named “Superman Ride of Steel” It’s something like a mirror image of six flags America’s superman, and a Gurstlauer euro fighter named “Tantrum” also some other rides like Vekoma SLC and Vekoma Boomerang. Darien Lake also has Hotel, Campground, Water Park, and Performing Arts Center as well which is operated by Live Nation. This Resort is one of the Resorts on the list of Six Flags list, and the second one is in Six Flags Great Escape resort in Lake George. This park is a little bit good on the six flags list to visit.

Six Flags St. Louis Theme park is located in the middle of America Eureka Missouri. It has some awesome rides like “Mr. Freeze Reverse Blast”, Wooden Roller Coaster named “American Thunder” also “The Boss” Wooden Coaster, and one of the best Hurricane Harbors. This Theme Park has also a few more interesting things like Superman: Tower of Power and SkyScreamer. The one thing with this park is doesn’t have a standout coaster. Overall this park is good with different types of rides with wooden coasters, but there are nothing extraordinary things that make us feel like we need to visit Six Flags St. Louis Theme Park.

Six Flags Discovery Kingdome and Six Flags Hurricane Harbor Concord are located near San Francisco, North California. This Theme Park has rides “Medusa” a B&M Floor Less, “The Joker” an RMC Hybrid, also some other rides. The park has a 150-foot height limit, they need to get more creative with it. The park launched new rides in the year 2018 and 2019.

Six Flags America is located in the east of Washington, DC. This park has more than 100 amazing rides. This park has 10 fast and furious coasters. It has some more rides like “Batwing”, 200 foot high “Superman coaster”. There are special rides for children also. The Hurricane Water Park which opens seasonally also has the world’s largest wave pools with a number of slides. For the winter season, it has events like HalloFest, Holiday in the Park, etc.

Six Flags Georgia is Located west of Atlanta with a 290-acre huge area. This amazing theme park is a family attraction with more than 40 rides, Shows, and activities. It has rides like “The Twisted Cyclone hybrid roller coaster it’s a wooden coaster with the latest steel track combination that gives you a thrilling experience during the ride. “Justice League” Battle for Metropolis this ride offers you a 3D and 4D animation experience. The Joker Chaos Coaster has 24 rides that are against each other and this rids rocketing back and forward up and goes down seven stories. “Harley Quinn Spinsanity” This rid will spin and twist you with a thrilling experience. “Goliath, Batman, The Ride Superman Ultimate Flight” and 8 different roller coasters. “Monster Mansion” family attraction. “Hurricane Harbor” Tsunami Wave Pool is award-winning.

Six Flags Mexico is located outside of Mexico’s capital. In our list, this park is one of the best theme parks in six flags theme parks. It has rids named Superman El Ultimo Escape, Medusa Steel Coaster, and Wonder Woman Coaster. They also have some more coasters and rides as well which will make you feel fun and thrilled. The theme of full areas makes parks more appealing than the other six flag parks. This theme park has 9 roller coasters and 4 of them are family thrill coasters.

Six Flags Over Texas theme park is the original Theme park of Six Flags and that’s why in this park you will get a much better experience than you can’t find in the other six flags theme parks on the list. It has Titan, Giovnalla Hyper Coaster, New Texas Giant, RMC hybrid, etc. Also has some supporting rides like The Joker, Batman The Ride, Sky-Screamer, Harley Quinn, etc. Overall this park is in a good place on our list.

Six Flags Fiesta Texas is also known as Fiesta Texas, this park is located in LA Cantera, San Antonio, Texas. This Park was built by Gaylord Entertainment company and it was opened in the year 1992. The park was purchased by Six Flags in the year 1996. This park is located on 220 acres and this park’s most loved icon is Scream which you can from all around the park as well as outside of the park location. The rides that you can ride here Sky-Screamer, Wonder Woman, Superman, and iron rattler. So this park is one of the best parks on the list of Six Flags theme Parks.

Six Flags New England is also known as name Riverside Park and the great escape. This amusement park is located in Agawam, Massachusetts. The park was opened in year 1800s, and this park is the oldest amusement park on the Six Flags Theme Park list. It was owned by Premier Parks in the year 1996 and after rebranded as Six Flags New England in the year 2000. The most loved ride is Superman has the highest rank among roller coasters.

Six Flags Magic Mountain is also known as Magic Mountain is located in 262Acres. The park is opened in the year 1971 and was developed by Newhall Land and Farming Company and sea world INC. In the Year 1979 Six Flags owned this park. The Park Has 19 Roller Coasters and 2 Water Rides. On average, 3.365 million visitors visited this park in the year 2017. If you want to visit this park location you can find 26101 Magic Mountain Parkway Valencia, California 91355. Rides you can visit in the parks are Apocalypse, Batman, Canyon blaster, Full throttle, Gold Rusher, Goliath, Magic Flyer, Ninja, New Revolution, etc.

This park is located in Jackson, New Jersey, and is owned and operated by six flags theme parks. The first time it was opened publically was in the year 1974 under the direction of Warner LeRoy. In the year 1977 Six Flags Owned this park officially. This park has a wild safari animal park which is 510 acres and this park is the second-largest theme park in the world. There are 14 roller coaster rides and 2 water rides you can enjoy. The main attraction is in this park-like Main Street, Fantasy Forest, and Adventure Alley. Adventure Seaport, safari kids, movie town, lakefront, frontier adventures, the golden kingdom, Boardwalk, Fright Fest, Holiday in the park, etc.

So these were all the 15 Theme parks Of Six Flags you can visit. Now you know all about Six Flags Theme Parks.